In this series, I will include some personal photos, so that you can see the gradual conversion to Anglicanism on my face.  Actually, its more of a conversion from youth to middle aged; from skinny to pudgy; from clean shaven to bearded.  But regardless, see if you can observe an Anglicanization happening as I begin to drink Beer and eat Fish and Chips.

I’m not planning this out too carefully, just writing as I go, so not sure where this will take me.

One thing I forgot to mention in the previous post:  In the early days when Dad was planting our church, we suddenly lost the lease to the building we were using.  The local Episcopal Rector, who was a charismatic, invited us to use their building.  So on Sundays, we worshipped there after their service.  We have a few joint prayer services as well.  I remember how different that Prayer Book service was, and I remember my Dad processing in and everyone wearing robes.

On the personal side, we lost my Mom, Sharon Goebel, in a car accident in the summer after I graduated from High School.  It was crushing for all of us as you can imagine.  We lost a wife and a mother, our extended family lost a sister, daughter, and aunt.  Our church and community lost a beloved friend.  She was a spiritual friend for many, and a loving person who helped many people grow into their strengths.  The church and many of our former church friends and our families rallied around us and helped us grieve, and begin recovery. 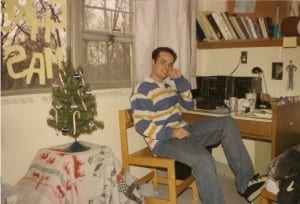 But one aspect of my grieving that would become important to me later was related to my church upbringing.  Our church taught that psychology was unchristian.  There was something called Biblical Counseling, but it ignored the mental health practices of modern psychology.  The church mistakenly believed that the Bible is supposed to have every answer to every question anyone could ask, rather than being given to reveal our salvation and beliefs.  So when I went off to college, I never sought counseling or mental health support for my grieving.  I don’t blame anyone for this, but I later would see that the theology of “biblicism” can harm people in unintended ways.  As I journeyed into Anglicanism, I found myself in an environment where science and faith can be seen as complementary, rather than in conflict, including psychology. More on that later.

So my college years began with a tragedy that marked my first year and beyond.  After emerging from grieving, I began to look around for a church and some Christian fellowship.  I found an Assemblies of God church.  This was in Berea, Kentucky at Berea College.  Berea was very stretching for me, as a liberal leaning college.  Definitely not Evangelical!  Even though I was engaging with the curriculum and open to learning, I responded by becoming even more fundamentalist than the church I was raised in.  I think I was mostly kind to people, but my efforts were geared toward a hard-edged message.  For example, I posted scripture verses anonymously on campus that had some loving passages, mixed with some out-of-context judgment passages.

Fortunately, the A/G has a college fellowship, and our pastor asked me to help him start a chapter on campus. As a result of this effort, I met many other Christian students on campus. As we started meeting and praying together as students, an amazing thing happened.  We all felt called to gather for prayer at 9pm every night in the college chapel. For almost a year, we gathered every night for prayer.  Mixed into this was our youthful errors, but it was a very unique time.  We really just gathered and prayed together.  There was a core group, but also many others who would join us.

I really believed that this was going to be a massive REVIVAL that would win every single person on that campus to Christ.  I also thought that pretty much everyone who didn’t attend the prayer meetings was really not serious about their faith.  When the meetings fizzed out after a year, I was crushed.  My understanding of our faith was that we needed sudden, massive revivals to know God was at work, a belief which some label ‘revivalism’.  I wasn’t sure what to do when one didn’t happen.

But a friend helped me realize that it was time to let it go. That we had had a great time of prayer that would change our lives.  That we should now find out what we were each called to do with that.  This prayer revival was a huge impact on my life, and many others who were there.  I think it instilled in me a spiritual discipline of prayer and quiet, and of the power of just being in God’s presence.  However, I also felt that I really never learned how to pray.  What was frustrating was that I felt like I was spending hours trying to pray, but never really praying.  I was worrying, I was talking, I was listening.  I knew God was near.  But I felt like I was spinning my wheels.  More later on that too.

By my Senior year my it was becoming obvious how unloving my approach to faith and to my witness had become.  I started to see that losing my Mom had affected me more than I thought. I saw that I needed to be more a part of a church community and less independent, so I started getting more connected at church.  This eventually led to our pastor asking me to help out.

My first sermon was a 15 minute, 15 point sermon. I spent the whole time sweating and reading my notes (while trying to pretend I wasn’t reading them).  I also remember walking out of a revival service from the “laughing revival” that included some really intense “ministry time.”

But another memory that is relevant to my future journey was the time our pastor asked me to lead the evening Communion service.  I remember that special night as we gathered at the church.  Everyone came to the front as we read through passages of Scripture and prayed.  There was a silence in the room.  I was following the pattern my Dad uses in Holy Communion, which I realized later is different than most Kentucky Assemblies churches.  Everyone was in hushed silence as we received together.  Later, the good folks of that church thanked me for leading communion.  That experience stayed with me for years as a gift from God, and I often reflected on why that quiet service seemed so meaningful. I was surprised because our tradition was so focused on exuberant praise and emotion.  Yet this reverent service was one of my most powerful memories.

During this time I was finishing my college studies, but also completing ministerial studies by distance education.  I had sensed a call to ministry, and was preparing for that. 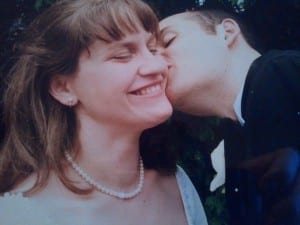 But the most amazing thing happened that year when I asked my friend Victoria if she would go on a date.  I mean, I literally said, “Will you go on a date with me?”  I can be a bit like Dr. Spock at times, and so that explains why I asked that way.  She said yes, and the next thing you knew we were engaged. Actually it was about six months later.  Victoria and I had met at our college fellowship, and had served on its leadership team.  She and I were great friends who fell in love, and started our new life together.  I’m sure she got sick of my constant theological blabbering, but otherwise we had fun.  We got married after I graduated, and when I started as Associate Pastor at FJF, we moved into our apartment on the church property.  And so the next chapter began.

Thank you for reading this far!  In the next episode, a journey toward “something else” started as I began serving as a pastor.

My Anglican Journey by Greg Goebel