Sir Ken Robinson is a first-class speaker. I’ll never forget the first time I heard and watched his enthralling TED talk on the systemic flaws of education in our time. I listened to Robinson’s TED talk in the animated adaptation by the brilliant folk at RSA Animate. Robinson describes how the modes and methods of public education stifle the inborn creativity of children. Robinson’s main argument is that “we are educating people out of their creativity,” yet I didn’t sense the sting of cynicism in his voice. Here is a man who takes the imago Dei seriously in education, while envisioning how public education could be places of creative and intellectual formation. As Robinson finished his TED talk to rousing applause, I said to myself, “I want to preach like that.”

Going on a TED binge

Watching Robinson’s TED talk on changing the paradigms of education was like entering a portal of all things interesting. Once you feel intellectually inspired by one TED talk, it’s not difficult (nerd alert!) to binge watch TED talks. My wife and I have spent evenings watching back-to-back-to-back TED talks.

The TED Conference has become a powerful cultural institution in the 21st Century because viewers can hear presentations from some of the world’s best leaders such as Simon Sinek, Brene Brown, Barry Schwartz, and David Brooks. TED talks range from the outright weird (Eric Whitacre) to the hilarious (Derek Sivers). Gleaning truth from TED speakers reminds me of St Justin Martyr’s statement about finding truth in pagan philosopy, “all truth is God’s truth.”

Much of that commitment to grow and learn as a preacher comes from my youth when I had to endure bad sermons. I’ve sat under remarkable preachers and I’ve sat under boring preachers. In my youth, I always inwardly groaned when preachers recycled their favorite (read: boring) stories, never speaking from fresh experiences. Where was the self-awareness that these stories were on perpetual repeat? I could never fully respect preachers who regularly proclaimed pat Christian phrases as if these cliches brought some new insight to the human experience. Those patterns spoke laziness in preparation and I never wanted to be a lazy preacher, upheld by the crutches of cliches in the pulpit.

The Art of Storytelling 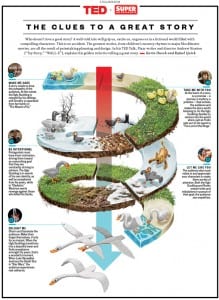 From TED.com: How to tell a great story, visualized

I desire to be a lifelong learner in my vocation as a priest, which means that I’m seeking to learn the art of communication within and beyond the guild of preachers. I’ve witnessed legendary preachers who are master storytellers. I’ve read good preaching books on the place and use of anecdotes and stories in sermons. Yet in my experience, the best teachers on how to tell a good story are TED speakers. I’ll continue to read the golden-mouthed St John Chrysostom to grow in biblical and liturgical preaching, but when it comes to storytelling, I’m looking to a master craftsman like J.J. Abrams. Storytelling has never been a natural gift for me, so I need help to learn the elements, sequence, and narrative forms of stories. To grow in the art of storytelling means going outside the guild of preachers.

A Conference Is Not a Congregation

Yet, for all the benefits I’ve gained from TED talks, I’ve begun to ask some important questions about the differences between a TED talk and liturgical preaching. A preacher enchanted by the skill of a TED speaker is akin to an amateur guitarist watching Eric Clapton in concert. The lights, the stage, the sound system, the sing-along moments, all these things make the amateur feel like a hopeless player because he can’t produce an arena-sized sound. He’s mesmerized by the moment and he leaves thinking, “Why do I even try?”

In as much as TED talks can help preachers in their craft, they can also be unhelpful and discouraging. That’s because we seldom consider the form and design of conferences like TED. In her New York Times article, “The Church of TED,” Megan Hustad compares the emotional effect of a TED talk to a tent revival sermon. Hustad, who grew up in an evangelical home, says TED “with its airy promises, sounds a lot like a secular religion.” The venue and design of a TED talk creates “the appeal of sitting in a darkened room as a speaker pulls you into a crescendo of conviction that you can and will improve — and more attractive still, that your individual change for the better will make the whole world better.”

The highly sought conference speaker may only have a catalogue of 6–12 talks that he gives. These talks are so good because they are highly crafted, edited, and revised addresses that represent hundreds of hours of research, writing, and rehearsal. He can take a speaking tour around the world with that catalogue, but with only 12 talks, he wouldn’t make it through Ordinary Time in an Anglican parish.

The liturgical preacher doesn’t preach from a catalogue of her rhetorical hits, she preaches from a canon–the full canon of Scripture. Even when a preacher delivers one of her finer sermons, it’s time to move on come Monday. The Word of God is living and active and that means the preacher must look ahead to next Sunday. It also means that the Anglican pastor can’t sequester herself in her study all week. She must engage with her people, listening to their stories of heartache and hope as she prepares and composes a sermon on the story of God.

For highly sought speakers, new talks or series of talks function in the same way as a new album release. After months or years of deep study and preparation, the writer and speaker begins a speaking tour with a new set of talks. I have no desire to disparage the form of conference speaking. Well-crafted addresses have been of great benefit in my life. I’ll continue to watch TED talks to inspire my mind and heart. But this form of public speaking is foreign to an Anglican pastor serving in a local parish. When December comes round, he has to be thinking about what approach he’ll take on the Christmas story, a familiar story he may have already proclaimed a dozen times or more. It’s tempting to play the homiletical hits of Christmas past, but it’s more faithful to wrestle with the living and active Word of God; to search for new insights in the unending mystery of Christ’s Incarnation. There’s no TED talk about how to do that well.

In fact, it might be easier to give a TED talk than preach every Sunday throughout the year in a local Anglican church.

To proclaim an imaginative, intellectually thrilling homily every week is not the whole calling of an Anglican pastor. Deacons and priests who take vows in holy orders are called to numerous commitments, not preaching alone. In the words of Austin Farrer, an Anglican pastor ought to become a “walking sacrament.” To become a walking sacrament in a local church means presence more than polish. In fact, Farrer suggests that we ought to expect that an Anglican pastor will be delightfully average in many ways, not the chief example of excellence in all things pastoral, preaching included. Farrer writes,

Anyone may be a better Christian than the priest, more holy of life, more deeply versed in prayer. But the priest has a special obligation to lead a devout life, to study divinity, to pray; and so to be fit to give some help to his fellow-Christians in these supremely important concerns. Other people may expound the faith, and speak or write in Christ’s name, more wisely and more competently than the priest. They may do such things, and even do them better; the priest must: he must keep the congregation supplied with its staple diet: he must keep giving them some word from God.

I will never be a master storyteller like J.J. Abrams, but that’s not my highest calling anyway. I pray that I could somehow become a “walking sacrament” that brings the grace of God into the parish I serve. I’ll still probably watch Abram’s “The Mystery Box” talk numerous times to become a better preacher. But I’ll always be convinced that the greatest Mystery and the greatest Story I communicate doesn’t come through my skill as a storyteller or preacher. It comes when I invite people I serve to an altar and offer the Mystery of Christ’s Body with the ever-predictable, unoriginal, but eternally comforting words: “This is the Body of Christ, the Bread of Heaven.”

About the Author: Jack King

Jack joined Anglican Pastor as a writer in February, 2014. He is a native of Knoxville, TN and serves as rector of Apostles Anglican Church in his hometown. Before serving at Apostles, Jack served Methodist churches in Knoxville and Gateshead, England. In England, Jack discovered his love for the Anglican tradition that would later become his spiritual home. He was ordained an Anglican priest in 2008 on his 30th birthday. Jack is married to Emily and they have two young children. Jack received a B.A. in History from Samford University and a Masters of Divinity from Duke Divinity School.