When I was writing Giving Up, I discovered an unlikely source of insight in Zag: The Number One Strategy of High Performance Brands by Marty Neumeier.

The foundational principle is that successful brands don’t follow the crowd—they don’t look at the leaders in the marketplace and try to latch on and say “Me too!” Instead, when everyone else zigs, they zag.

I was blown away by this seemingly obvious idea as I look at the church landscape over the course of my ministry.

There was a time in the not-so-distant past when being the church was fairly normative—churches were sustainable because there were established habits of churchgoing and giving. But as the culture grew increasingly secular, successive generations became less connected with these presumed patterns.

In response, churches began to chase or imitate the culture. They saw what had led the competing voices to become so compelling and they adapted.

You guys love Starbucks? We can have a coffee bar!

You guys are in a hurry? We can keep things short and sweet!efficient!

You guys like laser shows? No problem. Please come and see how ‘relevant’ we are today!

Now, after a few generations, it all sounds a bit contrived. Ugh.

Is this why Jesus chose fishermen who did NOT use lures but used nets instead?

This has been explored much more fully elsewhere. For example, I’m thankful for groups like the Telos Collective who are engaged in sincere reflection on the intersection of the gospel with our present culture. How does the church remain faithful to the call of Jesus when the pull of culture seems farther away than ever?

Perhaps more now than in those earlier days, I understand the difficult call to holiness. To be a holy church will mean deliberately taking opposing views to the surrounding culture. And that’s a difficult path.

It’s made all the more difficult because our words and actions cannot outrun our patchwork history. Christians have done amazing things for Christ in the past and even now in these days. But we haven’t got it right all the time.

For example, we support a vision of chastity and marital fidelity but haven’t quite lived up to the implications of it all the time. We know that. We desire to promote racial reconciliation in the wake of rising tensions, but sometimes our churches don’t look like it. I mean really LOOK like it.  (See this interview with an amazing ministry that might help your church address the issues of race.)

What about our language? Our giving? Our honesty in daily speech? Our practices of the moral virtues? I know that the Christian faith isn’t about earning God’s favor…but it shouldn’t not be about making an effort to live it out! But conformity gets in our way too much.

Read the opening lines to this famous sonnet by William Wordsworth. Doesn’t it apply perfectly to our day?

The world is too much with us; late and soon,
Getting and spending, we lay waste our powers;—
Little we see in Nature that is ours;
We have given our hearts away, a sordid boon!
This Sea that bares her bosom to the moon;
The winds that will be howling at all hours,
And are up-gathered now like sleeping flowers;
For this, for everything, we are out of tune;

Indeed, in one way, our conformity to this world and its values are almost inevitable; we are people in/of/with and by our culture. But in a “Zag” way, conformity is totally avoidable.

The early church faced similar circumstances. As Tim Keller notes, early Christians were viewed as strangely, offensively intolerant for their unwillingness to recognize other gods. Their views on human sexuality seemed backward and quaint to a society that viewed sex as a commodity to be purchased and seized by the powerful.

Read this quote from the inimitable Keller to see just how ‘zaggy’ the church was about their money and their lives.

Yes, indeed! What a zag! In the face of what must have seemed like PR roadblocks for the early church, it still kept growing.

Why? Instead of allowing itself to be drawn into debates on issues, the church lived out its holiness concretely. Its witness wasn’t stalled by always having to assume a defensive posture.

But this still doesn’t explain the early church’s growth. Sure, they weren’t reviled for their pushy moralism, but they were still different in ways that weren’t obviously appealing.

What positively defined the church over and against the culture?

The church was radically generous, especially in situations that no one could have imagined helping.

For the most part, it was the Christians who were the first ones in and the last ones out when cities across the empire erupted in plagues. They died alongside the ones who had thought them strange, while others fled to the countryside. They gave their money—even their lives— to save others. Weird.

The point is: there’s no ‘wrong’ side to the generosity debate.

In a ‘post-Christian’ society, Christians will invariably be viewed as weird. Wouldn’t it be great if the weirdest thing about us was our bizarre insistence on giving up our money, our comfortable lifestyles, our time to further the cause of righteousness?

The call to zag is the call to holiness, a call more pressing than ever in our world. Holiness is hard work, and in many cases, it’s going to lead us to be hated, just as John predicted.

In the midst of that, though, we have the opportunity to show a radically different way of living—by giving.

Want to think more about these things? Give the gift that keeps on giving! 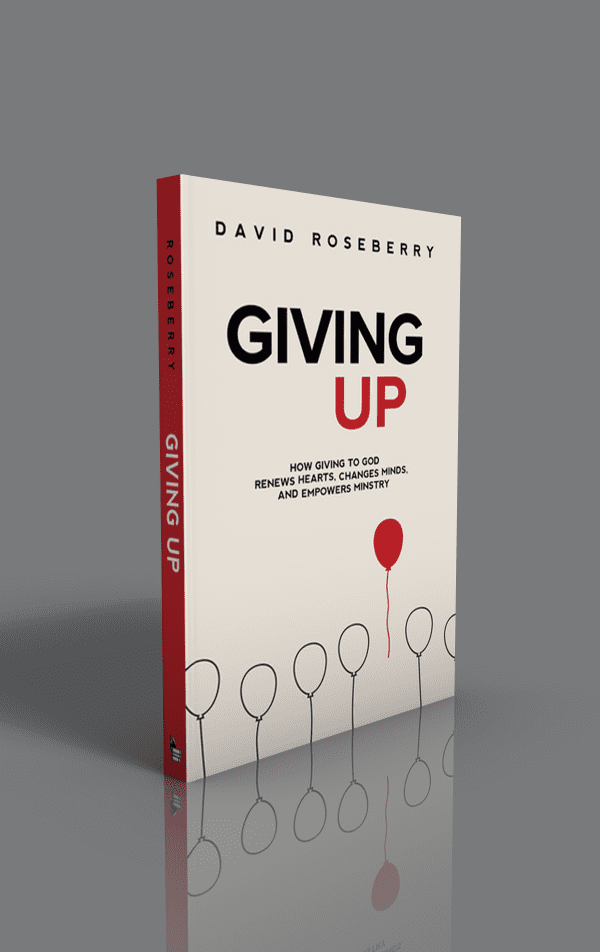 A copy of “Giving Up” available here.