What’s Drawing a New Generation to Liturgy? An Interview with Author Winfield Bevins

UPDATE: Read our review of this book.

Winfield Bevins has been a part of the team here at Anglican Pastor for a while now. (Click here to read his posts.) We’re excited to announce the publication of his latest book, Ever Ancient, Ever New: The Allure of Liturgy for a New Generation on March 5, 2019.

As somewhat of a sneak peak, Winfield has graciously answered our questions about his new book. If his answers intrigue you, make sure to order the book ! You can do so today. 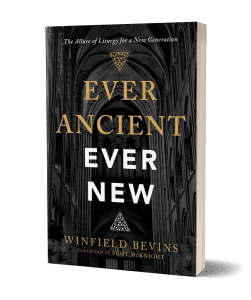 What’s your new book about?

Ever Ancient, Ever New tells the story of a generation of younger Christians from different backgrounds and traditions that are embracing liturgy. It’s filled with stories illustrating the excitement and joy they have found in these ancient expressions of Christianity.

For two years, I have traveled across the United States, Canada, and England visiting churches, cathedrals, universities, and seminaries listening to dozens of young adults share how they have embraced Christian liturgy.

I have heard stories about how liturgy is impacting many lives, and I have interviewed hundreds of young adults and leaders to hear their stories about how liturgy has impacted their faith. They are hipsters, authors, teachers, students, pastors, and musicians, and people from all walks of life. But they have one thing in common: they have found a home in the liturgical practices of the historic church.

And, while it is most noticeable among young adults, this trend is true of people of various ages and backgrounds as well, believers who are seeking to recover ancient practices of the Christian faith.

Are you willing to share a specific story that you found?

Sure, let me share a couple of examples from the book.

Rick is twenty-seven years old. He was raised in a conservative evangelical church, and he learned to sing traditional hymns and memorized dozens of Bible verses as a child. He spent much of his youth at church, always there “whenever the doors were open.”

As he grew older, Rick began to feel that his church was too rigid, that it might be hindering him from experiencing the fullness of the Christian life. He looked for answers in the verses he had memorized, quoting them to himself, hoping these isolated verses would give him the fullness of life he wanted.

Eventually Rick grew weary and left his childhood tradition to explore a more charismatic church for several years. There he encountered the gifts of the Spirit and began to thrive—until the newness of the experience wore off.

Even after these experiences, at the end of the day Rick felt that something was still missing. He couldn’t articulate what that missing piece was; he simply felt incomplete. Having been raised with a solid doctrinal foundation, he had developed a keen respect for the Scriptures and he’d had vibrant spiritual experiences, but he still felt that there had to be something more.

In a last attempt to find what was missing (and at the risk of alienating himself from his evangelical background), Rick began attending a liturgical church.

Unexpectedly, he found himself at home in the liturgically infused services. He’d always heard from others how boring and dry “those traditional services” were, but when he experienced them for himself, he found he was overcome by the beauty of the ancient forms and rhythms. It was foreign, yet oddly, it felt like what he’d been searching for.

Rick began attending the church regularly and realized he had found his home in the liturgical tradition.

Jennifer was raised in a Methodist church where she was taught the importance of social justice, sacrificial service, and helping the less fortunate. Her upbringing focused less on the gospel or the teachings of the Bible and instead emphasized the outworking of its social implications.

Like Rick, Jennifer began to feel that something was missing in her faith. Looking for a spiritual experience outside of her comfort zone, Jennifer attended a Pentecostal congregation where she experienced a powerful “baptism of the Spirit.” When this happened, her faith became something personal, coming alive in a way it never had before.

However, after a few years in this church, she left in search of something more. Today, Jennifer attends a rural Anglican church, where she was recently confirmed as a member.

The journeys of Jennifer and Rick began on different ends of the spectrum, yet they end in similar places. I see their spiritual journeys as more than a coincidence.

As I’ve observed in interviews with people from a variety of backgrounds across the country, Jennifer’s and Rick’s stories represent a larger movement of young adults who are looking to fill a void in their faith journey. Their search has led them to explore different streams of Christianity, and many of them have found their home in more liturgical expressions of the Christian faith.

What prompted you to write the book?

For many years now, we have all heard statistics and figures concerning the steady flow of young adults leaving the church. I wrote the book to tell another story, one of hope, in which there a growing movement among young adults who are returning to historic, creedal, and liturgical reflections of Christianity.

In many ways, this book is about my own story as well. Having grown up in a low-church background, I eventually found my home in the Anglican tradition.

Over the past decade, I’ve learned that I’m not alone in my experience. I’ve spent countless hours speaking with young adults who have shared similar stories of deep curiosity and interest in the historic expressions of the Christian faith and the practices of the liturgy.

This is one reason I’ve written this book: to learn why young adults who are natives to the digital world and heavily reliant on technology are so interested in traditions that have been around for 2,000 years.

I know what first led me to follow these longings, but I wanted to know more. The book seeks to answer the question, “What is the allure of liturgy for a new generation?”

As I’ve interviewed young adults around the United States, I’ve discovered a generation that is searching for God in the midst of unprecedented social and cultural change. These are sincere Christ-followers looking to face the challenges of a postmodern, post-Christian world that is increasingly multicultural, secularized, and globalized.

The result of my journey is this book, a profile of a slice of this emerging generation that is seeking to rediscover the ancient roots of the Christian faith.

What’s your dream for this book? What do you hope it achieves?

My hope is that this book will introduce contemporary Christians to the richness of the liturgy and that, through reading this book and the stories in it, readers will be better able to recognize and appreciate how the liturgy can help them grow in Christ with a holistic and embodied faith.

My hope is that reader’s faith will be renewed as they hear these stories and encounter the power of liturgical practices. I hope that through this book, readers will find fresh ways of exploring and engaging with these historic practices in meaningful ways.

What about people who have been a part of a liturgical tradition for quite some time? What do you hope that they would take away from this book?

This is a great question. I’ve also written the book for those who are already in liturgical traditions and who need to be reminded of the riches of their own heritage and tradition.

Sometimes, we take for granted thing things we do week in and week out, such as the liturgy and sacraments. If we are not careful our own practices can become stale and mundane.

There are many people who have been in liturgical traditions their whole life that need to refresh themselves in the beliefs and practices of their own faith. I hope this book will help remind them of the beauty and the treasure of the liturgy.

What’s the most surprising thing you discovered in writing this book?

I have come to the conclusion that liturgy, when rightly appropriated, is one of the best ways for us to make disciples in a postmodern context. It is this emphasis—the appropriation of ancient practices for disciple formation today—that is the unifying theme of this book. It has confirmed for me that I am not alone in seeing the ongoing relevance and blessings of liturgy for the twenty-first century.

The allure of liturgy isn’t just a passing fad or the latest gimmick; it represents a longing for roots that connect us to another reality, a world set apart that runs parallel to our modern age. It’s a longing for ancient practices that form our faith and connect us to the larger body of Christ, preparing us for God’s mission in the world.

The recovery of liturgical practices among this generation is a sign of revival, a Spirit-inspired movement that should give us hopes for the future of the church as it rediscovers its ancient roots.

Ever Ancient, Ever New officially goes on sale March 5, wherever books are sold.

If you pre-order the book , you’ll immediately get access to:

P.S.: Stay tuned for an Anglican Pastor review of Ever Ancient, Ever New in the coming weeks!