Clergy Political Activism: When should we get involved?

Churches and clergy are supposed to be politically non-partisan. Sometimes clergy are able to participate in politics as individuals (such as voting), but for the most part, they are to refrain from partisan politics. We serve the King of Kings, and represent his Church, not a particular party. Our mission and calling is to proclaim the Gospel of Jesus Christ and his Kingdom.

And yet the Gospel needs to be proclaimed in every aspect of human life, including politics, social conflict, and institutions. Being non-partisan doesn’t mean that we should avoid politics or protests or social conflicts. It can’t mean that, because we are supposed to be there with the Gospel.

This is why some priests will attend protests or rallies or political events as a chaplain. They are declaring themselves to be neutral, and their presence is recognized as spiritual.

The Church has been wrestling with these exact questions from the first martyrdom. Christians were the first people to petition the emperor to end abortion and infanticide.  They spoke up to a political leader about a social issue.  We know that they did this, and we know that we have always wrestled with the difference between partisan politics and Christian engagement. I can’t answer all of those questions for everyone, but I can share my own way of trying to discern my own personal engagement.

First, I am always willing to go anywhere to be present as a priest.  As long as my presence is recognized as not endorsing any party or individual, I would be happy to pray with people, listen to people, and help people at any event. I would call this being a chaplain. Billy Graham advised and prayed with U.S. Presidents from the Republican and Democratic parties. He represented well this idea of a politically neutral pastoral presence.

Second, there are times when we are called to represent the Christian viewpoint on social matters.  Last year I was invited to an inter-faith panel discussing the violence in our city of Atlanta, particularly police violence in minority communities.  On this panel was a buddhist monk, a Nation of Islam leader, a community activist, and the head of the homicide department for the City of Atlanta. I represented the Christian minister’s perspective. It was clear to all involved that my  presence was not an endorsement of buddhism, Nation of Islam, or of any particular political viewpoints or solutions. I was there to speak the peace of Christ, share the Gospel, and answer questions from the orthodox, Christian perspective. It was a great opportunity and I’m thankful for it. I would call this being a Christian spokesman.

There is probably wide agreement amongst believers that these first two ways of engagement are non-partisan and appropriate. But what about, for example, joining a protest? 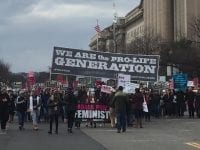 My presence at the March for Life came about as a result of an assignment. I was assigned by my bishop to represent our diocese at the March for Life. We are a pro-life diocese, and I fully support the pro-life and whole-life mission. We believe that pro-life is not a partisan issue. We don’t care if you are a democrat or a republican or a libertarian – you should support life from conception to natural death.  For us, the Kingdom of God demands this. And this has been an issue for Christians from the earliest days of the Church. Its not like modern American Christian invented the pro-life position. The Didache (1st century Christian document) says, “you shall not murder a child by abortion nor kill that which is born.”

So even though most Americans think that abortion is a Republican or Conservative issue, we don’t see it that way. We see it as a human issue, a Gospel issue, a Kingdom issue. We have to stand up and speak for the unborn and the vulnerable. 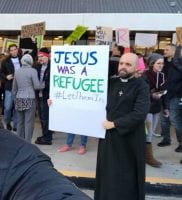 My presence at the Airport Protest was a bit more personal. I was not there to represent my diocese officially. I was there as a priest of the Christian Church. My sign read, “Jesus was a Refugee #LetThemIn.”  I intentionally wrote this because that is why I attended. The Holy Family fled to Egypt to avoid Herod’s violence (which was politically motivated). Because of this, we must alway see helping refugees as helping Jesus, Mary and Joseph. We have to stand up if we believe refugees are being mistreated. And I did believe that. People were being stranded in airports who had already been approved to be here. Many of whom had family here or elsewhere that they were separated from. I had to stand up for them as a Christian and a Priest.  To me, this was not a conservative issue or a progressive issue.

A good friend of mine went with me. Michael is an immigrant to the United States.  He has done quite well for himself and his family. He is not in any way threatened by recent changes in laws, because he is a U.S. citizen. Yet stand up he did. I was grateful to be able to stand up with him.

I do not accept the notion that my presence there was an endorsement of all of the individual aims of everyone there, or of the undefined movement in general. I made it clear why I was there.

During the protest, there were several “anti-Trump” chants that I didn’t participate in. That’s not why I was there. I was there to seek the humane treatment of the refugees who have already been approved. I was also there to promote compassion for muslim refugees and immigrants, most of whom are fleeing from violence, not causing it.

My message in this was that regardless of your political solutions to refugee crisis, we must be compassionate, humane, and gracious. I don’t question the faith or sincerity of any fellow clergy who didn’t interpret the plight of the refugees to be as dire as I did. I do question us when we don’t speak for compassion and fair treatment, speak out of fear, or if we demonize any group of people. Whatever your opinion about legal and illegal immigration control, as a Christian your focus must be on understanding and grace. This is who we are supposed to be.

The Kingdom of God

For me, its not about what the Republicans want me to do, or the Democrats, or MoveOn.org or Fox News. Its about the Kingdom of God. For me the teaching of what is called “Christian Humanism,” championed by Pope John Paul II is very helpful in discerning all of this. But there are other schools of thought that are founded on the Gospel and Christian theology. Some find Wendell Berry helpful, others Stanley Hauerwas or Russell Moore. I recently heard John Stonestreet speak, a politically conservative Christian, and I heard the Gospel as the foundation. Some find Mother Theresa’s actively peaceful vision of serving the least and the outcast to be a light. Find one, and follow it where Christ leads you. You may not end up at a protest, but you also might. Have some poster board and markers ready just in case.

What would I not do? I don’t march for lower taxes or against the TPP or for Wall Street Reform. I don’t post on my social media about my opinions on charter schools or small business employment taxes. I don’t have a problem with Christians marching for or against any of these. Engagement is good. But as clergy I want to remain non-partisan at all times and I don’t feel that these issues will help me focus on that. This is so that when I do stand up, I can hopefully be seen as representing the Gospel and not the Donkeys or the Elephants.

Speaking of Candidates and Parties

When I have posted or spoken about a candidate, I’ve tried to focus on his or her actions and words, especially when I believe that they are reflecting (intentional or unintentional) harm to vulnerable people. I won’t tell you how to vote, but I’ll tell you if I believe a candidate is denying the image of God in others or threatening to degrade humanity.  I am also happy to evaluate the theological statements of candidates and parties, or their theologically related statements in light of the Christian faith. I’m not demanding that each candidate be a Christian. That’s not our aim because we live in a secular, pluralistic society. But I do want Christians to know when the theology of candidates demands some loyalty from them that a Christian can never give.

For example, our President recently told us that America should receive our “total allegiance.”  I’m sorry, but no. We can only give total allegiance to Jesus. To me, my standing up against this is not partisan. It is Christian.

Partisan politics in the church

Some of my fellow clergy are unashamedly partisan. I’ve even heard a few of them promote a political party’s agenda in church meetings. These are faithful pastors who love people, and yet slip into this. I suppose that’s inevitable to some degree and we sometimes slip. But the biggest problem is when we demonize “the other side.” And, sadly, that happens. Yes, some clergy are out there demonizing the liberals or hating on the conservatives. They are participating in the de-humanizing of their political opponents. This is not what Jesus is calling us to. We’re supposed to be reaching out to all people, not slamming the doors of evangelism shut by venting our anger against people who disagree with us.

People are never the enemy

Jesus said to love our enemies. St. Paul wrote that our battle is not against flesh and blood. Clergy, pastors, deacons, priests, bishops, please join me in denouncing denouncing. We can no longer demonize anyone. We can only point to the Gospel and to grace and to the dignity of each person in the image of God. Yes, we have to point out places where people are doing wrong to one another. We have to expose harmful ideas. But we don’t have to attack people.

So I don’t have all of the answers. But I do believe that if we focus on the Kingdom of God and his love for all people in Christ, we’ll get close to where we need to be. If we can remain as non-partisan as possible, we can be a witness for a loving Christ in a hateful, angry, competitive world. People are hungry for that, so lets introduce them to him rather than trying to gain personal political power for our group or people like us.

Jesus is Lord. Caesar is not. Amen.