Designed for Mission: The Typography of the ACNA’s New Prayer Book

(Read our Rookie Anglican Guide to the ACNA’s 2019 BCP here.)

If you went into an Anglican Church in South Africa, and were handed a Prayer Book, it would be in the Xhosa language.

Moments after entering, the officiant starts praying, you glance down and your eyes see the following text:

Were you able to figure out what you were supposed to join the congregation in saying? How long did it take?

Too long. They’re already singing the Venite, because this was the invitatory to Morning Prayer.

The typography didn’t help you identify what you needed to say, at all.

Now, thankfully, in most Xhosa Prayer Books, the rubrics indicating the speaker are italicized (bold below):

But are you the Abantu or the Um-Priste? And should you say “Nkosi…” or is that a rubric? Or a title? Difficulties remain.

We face similar difficulties in the mission-field of 21stcentury North America.

How many Americans, especially those under age 40, have ever even seen the word “officiant”, let alone could explain its meaning. What exactly are we Collecting for the Day?

For this reason, we were deeply attentive to the missional needs of 21st-century Anglican missioners (clergy, laity, and local churches) while designing the typesetting, formatting, and page-design of the Anglican Church in North America’s [ACNA] Book of Common Prayer (2019).

The Goal: A Useful, Beautiful, and Intuitive BCP

If the 2019 BCP was going to succeed, brilliant, poetic, theologically precise and irenic content alone would not suffice. That content needed to be presented in a form that would be easily, even instantly useful to the first-time Anglican liturgy attendee, as well as the veteran priest saying his Daily Office.

It also needed to be beautiful—pleasing to the eye, even though form must follow function.

And, if wisdom learns from others’ mistakes, it also needed to not be too philosophically ambitious in its design (I’m looking at you, Common Worship), but needed to allow for an intuitive user experience, meeting the needs of an average Sunday morning inquirer.

Only usage and time will give the verdict as to whether or not the 2019 BCP has succeeded in this way. But this was the intent, and here are a few specifics for those of you who want to look under the hood before the Prayer Book rolls off the lot (available for sale in June at AnglicanLiturgyPress.com).

The most important text in the Prayer Book, keeping mission in mind, is the text that is said by the whole congregation. Being able to easily locate this text was a top priority.

Priests and long-time Anglicans, through memorization and habit, already have a good idea of what’s on the page. The BCP is mostly a sequence of reminders of what to pray. The info that pertains to these things (Officiant text, rubrics, etc.) is the least important text for the new worshipper.

In addition, if the design of a Prayer book is not easy and intuitive, it will quickly catalyze an insider/outsider effect in the liturgy, of those who know what they are doing, and those who don’t, which is not good if one is trying to welcome the newcomer. This “mission-mindedness” dictated several inter-locking decisions:

Rubrics were italicized, in keeping with long-standing BCP custom, but were also set in a significantly smaller type.

The officiant should have read through them before the service has begun anyways, and so their content does not need to be readily graspable on the fly.

It was also determined that the BCP would be printed in black ink only (no red for rubrics), so that the cost of BCPs would be as inexpensive as possible, so that small churches and missions could still afford them. Again: mission guided the decision.

Text Said by the Whole Congregation

Text that is said by the whole congregation, in keeping with a trend in other Prayer and Worship books around the world, were to be set in a heavier, blacker type (“bold”), so as to draw the eye to them.

However, in many instances where bold-type is used, the type is so heavy and black that it renders the page very lop-sided in its weighting, and frankly kind of ugly. So, a medium-weight type (“semi-bold”) was selected, to highlight the congregational text, but still to keep the page looking balanced and classy.

Back and Forth, Call and Response

Additionally, when Officiant and People go back and forth with text, like in the Invitatory, the rubrics indicating the speaker are aligned to an indentation, not to the left of the page.

This visually breaks up the left margin (which the eye customarily follows down), and thus cues the reader to expect something different and alternating.

As you can see, the style (italic, bold, etc.) and size of type is its own communication. Previous Prayer Books have not fully capitalized on this fact, chiefly by inconsistent usage.

For instance, in the Episcopal Church’s 1979 BCP, italic type can indicate:

Because it is used so widely, just seeing Italics in the 1979 BCP doesn’t communicate anything, because it can communicate several things.

In like manner, regular type is most often spoken text, but it can also be used for titling. This sometimes leads to titles being read aloud in liturgies (!), but also to essential components being overlooked, such as the Collect of the Day, which is intended to be the previous Sunday collect, but due to the type-style, appears to merely be the title for the following Collects for the Days of the Week.

Again, “regular” type is doing too many things, so there is no encoded communication in its presence.

In the styling of the 2019 BCP, we sought a remedy to this ambiguous signaling, and we capitalized on the power of type-style. Thus, in a very simple fashion: 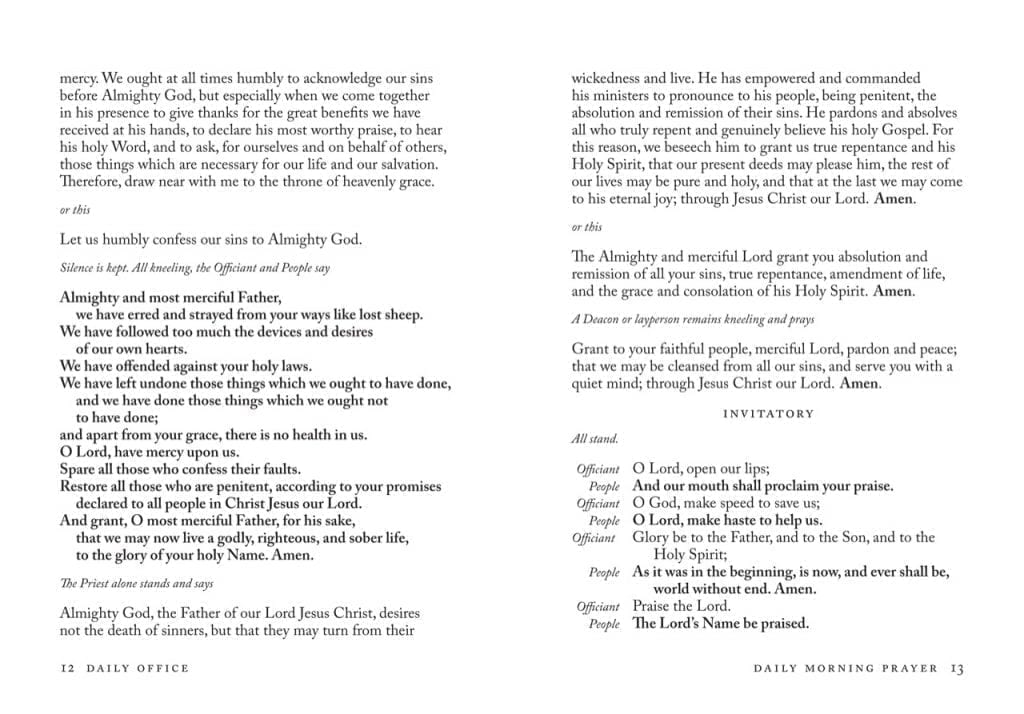 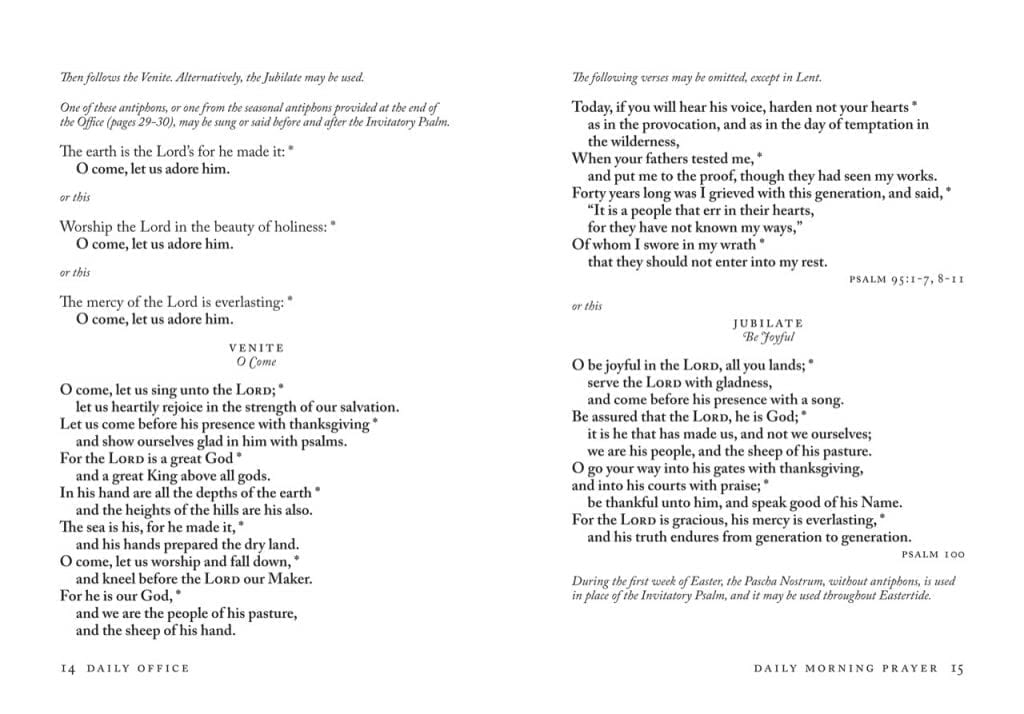 Look at the image of the 2019 BCP page spread (click here for a 2019 BCP Sample PDF), and run it by the same visual test that we ran the Xhosa BCP through. How quickly can you identify text said by all? Hopefully much faster.

Another word on the titles (such as “Morning Prayer”, “Invitatory”, “Venite”, “Sursum Corda”, etc.). All titles are aligned to the center of the page (as opposed to the left-margin in the 1979 BCP), to more clearly distinguish them from said text.

In addition, their extraordinary location enables them to be visually indexed faster. So, if the officiant says, “we will now pray the Collect for Purity”, you can visually glance down the two or three titles on a page-spread looking for that very phrase. This should also be helpful for the insertion of music, to be able to cue, “For the Sanctus we will sing”, and it is instantly clear what the Sanctus in fact is.

To distinguish citations from titles, they are aligned to the right-margin, and are also set in a slightly smaller type.

In many cases, when the title is a Latin title, the English translation is offered below in English, in rubric style, because it is explanatory, and with a slightly stylized (swash) initial letter, to visually set it apart from a rubric that gives directions.

For example, underneath the title “Venite” is “O Come”. Similarly, phrases like “Gloria Patri” in rubrics are explained in English, so that new users are not put off by the vestigial Latin.

Other features of the new Prayer Book intended to help the user experience include a footer system that uses the left hand (“verso”) footers to indicate the large section that one is (“Daily Office”, “Holy Week”, etc.) and the right-hand footer (“recto”) to indicate the precise rite (and even sometimes, what portion of the rite) one is in.

Every single page-turn was considered as to whether it would adversely affect flow and recitation.

Such decisions worked hand-in-glove with the same principle that was operative in the creation of the rites themselves. For instance, we did not put all the opening sentences at the front of Morning Prayer, so that the new user isn’t overwhelmed by 3 pages of “optional” text before continuing.

But, on the other hand, we have not omitted all of the sentences, which would force the new user to page-hop out of the gate. Rather, three “for any time” sentences are included at the front of the rite, with a rubric indicating where the rest might be found.

Whereas previous Prayer Books rely on custom and experience at many junctures, the 2019 BCP has rubrics that make directions as clear and as thorough as is useful, without tying the Prayer Book to any particular ritual or churchmanship.

Together with the many, many rubrics that utilize the word “may,” and thus make more portions optional than any previous Prayer Book—rendering all of the liturgies adaptable to constraints of time, space and interest—the 2019 BCP is set to be a most useful tool for reaching the mission field of North America with the love of Jesus Christ.

The 2019 BCP is set in Adobe Caslon, which was intentionally a very “safe” choice, because “daring” choices are destined to date themselves very painfully in a mere matter of years, and they also draw too much attention to themselves as fonts.

This is the last thing you want for a Prayer Book, where the typeface should be totally transparent to the illustrious words and the divine concepts which they represent. This called for a font that felt familiar.

And yet, it couldn’t be too familiar, because then it would feel pedestrian (think: Times New Roman), and not do honor to the unique nobility of the Book of Common Prayer.

As the old printer’s standby (trivia: it was utilized in the first printed version of the Declaration of Independence!), Caslon has a familiar feel, and yet, because of its origins (stemming from the old-style set of typefaces) it has an earnest, organic feel to it, that encapsulates a portion of the uniquely Anglican charism: what Julian of Norwich called “full homely divinity.”

At the same-time, its clarity of form gives it a solid feel, permanent without being stately. Adobe Caslon is especially “clean” looking, and it provided the medium-weight semi-bold that was needed. And, like all Caslons, it just has the most beautiful italic! There’s a reason Caslon is a classic!

And finally, because it isn’t bundled with Microsoft Office, it yet will appear unique to most modern users, and thus will become associated in a good way with the Prayer Book over time.

The Book of Common Prayer will be available in two iterations as of mid-June 2019: 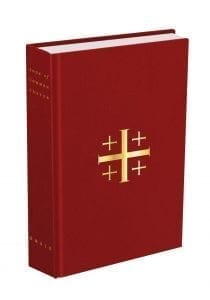 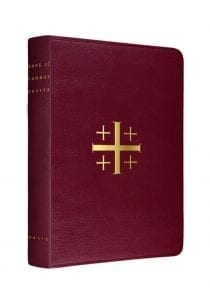 Copies will be available for direct purchase through AnglicanLiturgyPress.com.

Ben Jefferies is the rector of The Good Shepherd Anglican Church, Opelika, Alabama. He served on the Task Force that produced the Book of Common Prayer 2019. He is married with three daughters.