The Story of Our Hymns: All Creatures Of Our God And King

This is the second of a series on sacred hymns, the story behind them, their text, a recording, and a simple companion devotional.

“A single sunbeam is enough to drive away many shadows.” – St. Francis of Assisi 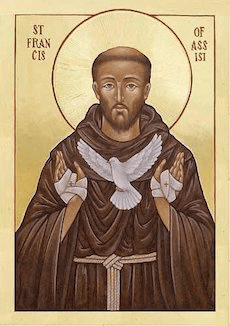 St. Francis of Assisi was an Italian Catholic friar and preacher. Although never ordained to the Catholic priesthood, he is one of the most revered religious figures in history.

Born in the year 1182 to the family of a wealthy silk merchant, Francis led a carefree youth participating in various revelries of the day. He joined a military expedition fighting as a soldier for Assisi and was taken prisoner, spending a year in captivity while also suffering illness. During this time Francis had a vision that directed him back to Assisi, where he lost all interest in that which he once enjoyed.

According to legend, he was selling goods for his father in the marketplace when a beggar came asking for alms. Francis abandoned his wares and ran after the poor man giving him everything he had in his pockets. His father was troubled and angry at the exchange. His friends also began noticing a change in Francis and jokingly asked if he was “thinking of marrying” to which he responded “Yes, a fairer bride than any of you have ever seen,” meaning his “Lady Poverty.”

On a pilgrimage to Rome in 1205, he joined the poor in begging at the doors of churches and began nursing lepers. He had a vision of Christ saying to him, “Francis, Francis, go and repair My house which, as you can see, is falling into ruins.” He took this to mean the church in which he was presently praying and sold some cloth from his father’s store to assist the priest there. His father, angered once more, tried changing his mind—first through threats, then beatings. After this exchange, Francis renounced his father and embraced, even more, the life of a penitent.

It was during this time he heard a sermon based on Matthew 10, in which Christ tells his followers to go forth and proclaim that the Kingdom of Heaven is near. Inspired by Christ’s instruction to take no money, nor even shoes, for the road, Francis followed suit. Clothed in rough garments and barefoot, he began to take on a life of poverty preaching repentance and bringing run-down chapels and shrines to restoration. He soon gathered a following of men and women who led simple lives without possessions, but with cheerful countenances and full of songs leaving a lasting impact on anyone who heard them. These men and women became known as the Order of Brothers and Sisters of Penance, or “Franciscans” and the Order of Poor Clares.

In Francis’ last days, he became virtually blind and unable to endure daylight. The first woman to follow his call, Sister Clara, built him a small reed hut in the garden of her convent where he could live out the rest of his days. He began to dictate his spiritual testament there. It is said that Francis could be heard preaching to the birds, urging them to praise God. Those who walked by could also hear faint melodies coming from within the hut. It was at a meal with the sisters that he wrote the text “Canticle of the Sun” or “Song of All Creatures,” later paraphrased into the beloved hymn that we sing today. He died on the evening of October 3, 1226 while singing Psalm 142.

To this day, St. Francis of Assisi is known as the patron saint of animals and the environment. He is also known for his love of the Eucharist, his sorrow during the Stations of the Cross, and for creating the Christmas crèche or Nativity Scene. Legends about him abound and various stories, prayers, and visions are attributed to him.

Listen to All Creatures Of Our God And King

One year for my birthday, I received the children’s book Miss Rumphius by Barbara Cooney. It tells the story of a young girl named Alice who listens to her grandfather tell stories of traveling to faraway places and coming home to live beside the sea. Because of his example, she too wants to travel the world. He tells her, “That is all very well, little Alice, but there is a third thing you must do. You must do something to make the world more beautiful.”

The little girl grows up and has many adventures of her own before retiring beside the sea. She starts a garden among the rocky cliffs overlooking the ocean, but is soon taken ill and confined to her bed. Even so, outside her window flowers began to appear. Blue, purple, and rose-colored lupines. The next spring she is much improved and begins to take walks along the rocky hillsides. Much to her surprise, she finds lupines growing in the most unlikely places. She then buys more seeds and begins to scatter them along the countryside. Much occupied by the task, her health improves. She becomes known as “The Lupine Lady,” and passes on the same words her grandfather shared with her to her own granddaughter.

I’ve always loved that story and have often thought of it as I move through the various seasons of my own life. What would it look like to spread beauty throughout the world in simple ways like Miss Rumphius? To sing amid life’s unanswered questions as the beloved St. Francis? I can’t help but feel that these simple acts of faith are pleasing to God. A sweet and fragrant aroma.

Whatever the circumstance, in sorrow or joy, may we rest in full assurance that God carries us. We need not be troubled by the cares of this world. We can rest in his love, the truth of his word and because of these things we can SING.

And maybe in some small way that will make the world more beautiful.

Keisha Valentina is a singer-songwriter with a deep love of hymnody who plays the piano, lever harp, accordion and harmonium. She has owned her own housecleaning and music business in Spokane, WA under the title This Beautiful Mess for over 20 years.