What do you call an Anglican Pastor?

“So are you a priest, a presbyter, a minister, a pastor, or a reverend?”

What Should I Call You?

The cool thing about Anglicanism is that we like to conflate rather than exclude things from the Christian past. This includes titles!  Rather than throwing out previous titles or names for pastors, we keep all of them in play. On the downside, this can be confusing because people aren’t sure how to address me. On the upside, there really is pretty much no wrong answer.

There are various terms used in the New Testament for those in pastoral leadership.

The word “pastor” is related to the term “shepherd.”  St. Peter wrote about ministers as “undershepherds of the Great Shepherd.”

The English word “minister” relates to this shepherd idea as well, but also has a sense of servanthood.

The NT uses also the words “overseers” and “elders.”  These are from the Greek words “episcopas” and “presbyter.” Today, our word Bishop comes from episcopas and priest comes from presbyter.

The NT also had deacons, who were set apart for ordained ministry as well, but without a direct eldership, presbyteral, or overseeing role.

However, because Christ made the final and ultimate sacrifice, priests today offer to God a sacrifice of praise and thanksgiving during the Eucharist.

So yes, we have priest/presbyters, but no we don’t believe that they are offering God a “re-sacrifice” of Jesus Christ. The sacrifice that we (the whole congregation, the priest presiding) offers at the Holy Table is a re-presentation of Christ, rather than a re-sacrifice. So the word “pastor” tells us that pastors are to be kind under-shepherds, “ministers” are to be servants, “priests” are to lead the people in a sacrifice of praise and thanksgiving, represent Christ in sacramental moments, and be spiritual fathers to the people. All of these things apply.

Practically speaking, if you attend or visit an Anglican church, here is a rule of thumb: “Pastor John” is always correct. “Father John” is never wrong but is not used in every place. “Rev. John” is not commonly used but is fine. “John” depends on context, and is more personal.

I can tell you from personal experience that very few Anglican clergy are offended or hurt by a “wrong” use of a title. We are called to serve, and to love, and not to demand certain titles. The titles, after all, are really not ours. They are related to an office and order to which we have been ordained.

Should we call our priest “Father”? Didn’t Jesus say to “call no man Father?”

My personal view is that Jesus was teaching us that all spiritual fathers are serving under, and should follow after The Father, our heavenly Father. Human spiritual and family fatherhood should always be under God’s fatherhood. Every teacher should see teaching as passing on the teachings of Christ, the Teacher, rather than developing personal doctrines. So for me, a priest can be a father to his people, under the fatherhood of God.

That said, I don’t think anyone should have to call their pastor “father.” But for some, it helps to remind us that we can follow him as he follows Christ.

Paul modeled this in his ministry. He was a humble servant, who nevertheless served as a father with spiritual authority (rather than power plays or manipulation).

What about women who are priests?

Without arguing for or against women’s ordination to the priesthood, I will say that Fr Thomas (who writes for this website) recommends calling female priests “Rev. Susan” or “Pastor Susan.” To my mind, a woman should never be called “father” and the word “mother” is usually reserved for nuns so that can be confusing. Even for those who disagree with women’s ordination as priest, I think “Pastor Susan” shows the respect for a woman pastor as a spiritual leader and pastor, without requiring assent to priestly ordination.

In addition to pastoral references, there are ecclesiastical titles that come with various offices. The Rector is the Senior Pastor of a church. Associate or Assisting clergy are serving under the Rector’s direction.

A Dean is either a regional clergy leader or the Senior Pastor of a Cathedral. A Canon is someone who serves in the Cathedral and/or leads a ministry on behalf of a Bishop (usually but not always an ordained person). Often people say “Dean Henry” or “Canon George” rather than “Father Henry” or “Father George” but that is a common convention, not an essential.

A Diocesan or Ordinary Bishop is the chief pastor of a Diocese. Assisting Bishops assist the Bishop in his episcopal ministry. We also have Archbishops who lead councils of Bishops, and who represent us to other “provinces” or other Anglican churches as “Primates.” People usually say “Bishop Bob” or “Archbishop Tom.”

Anglicans also have religious orders (monastics). Laymen in these orders are called “Brother” and laywomen are called “Sister.”

Why the need for Titles?

When all is said and done, the titles are really supposed to indicate our orders and our service to the Body of Christ. They are not supposed to elevate us as the most important or spiritual people in the Church. 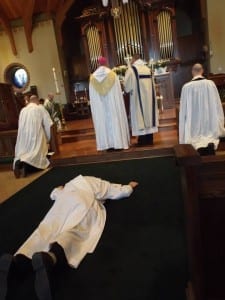 A priest ordinand lies prostrate before the Lord and the Church at his ordination.

It is true that as catholic Christians, we have a comparatively “high” view of ordained ministry.

We do believe that Jesus Christ set apart the Apostles as the foundation of the Church, with Jesus Christ himself as the Chief Cornerstone, as St Paul wrote to the Ephesians. These apostles then set apart others as deacons, and then laid hands on new Bishops, and then the Bishops set apart presbyters.

So we believe in three ordained orders: Bishops, Priests, Deacons, and one order of the Laity. All baptized Christians are one Body which has both ordained and lay members. The ordained orders are to serve and lead the lay order by equipping the Body of Christ to do the work of ministry.

So we do believe in ordained clergy, because we think that this is what Jesus himself instituted, but we don’t see them as operating outside of or over the Body of Christ, or of Christ himself.

We should see those people as servants, leading by example and not by compulsion. This “high” view, at its best, should be a “high” view of servanthood that supports the whole Body of Christ.

Greg is the founder of Anglican Compass (previously known as Anglican Pastor). He is an Anglican Priest of the Anglican Church in North America. He served in a non-denominational church before being called into the Anglican church in 2003. He has served as an Associate Pastor, Parish Administrator, and Rector. He currently serves as the Canon to the Ordinary for the Anglican Diocese of the South.