Beginning on Ash Wednesday and lasting for 40 days, Lent is a season of fasting and penitence in preparation for Easter.

The Church year revolves around two “cycles,” one for Christmas and one for Easter.

Because Lent lasts for forty days it recalls Christ’s fasting during his temptation/testing in the wilderness (Matthew 4:1-11).

To learn more about the Church calendar, click here.

How long is Lent, exactly?

Nowadays, most everyone agrees that Lent begins on Ash Wednesday and that it lasts for some reckoning of 40 days.

Here is an image from Wikimedia that illustrates a common way of counting the 40 fasting days of Lent (as well as when Holy Week and the Triduum start and end). 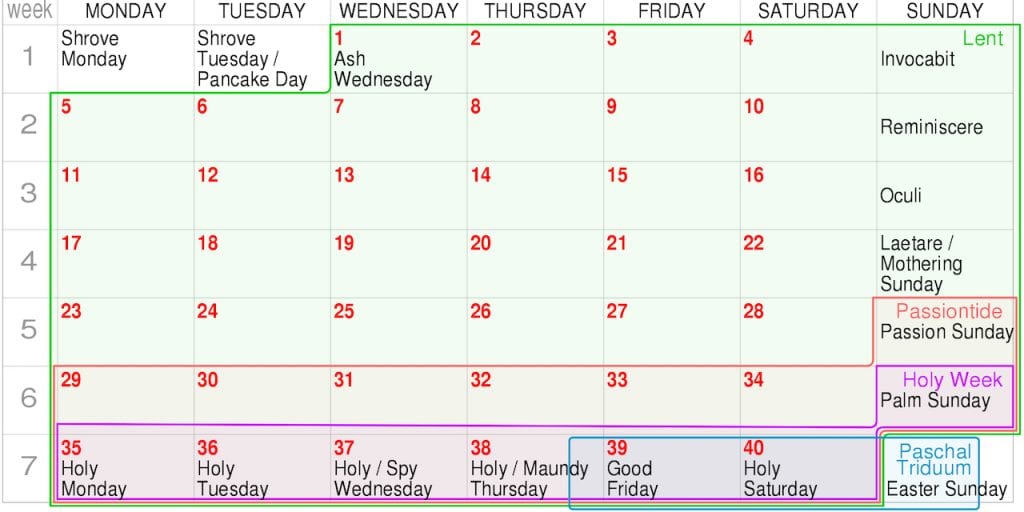 However, there have been and still are disagreements on:

(Note: We have a separate Rookie Anglican Guide to Holy Week.)

For more information on the history of Lent and lenten disagreements, I point you to the Oxford Dictionary of the Christian Church [ODCC]:

In the first three centuries the period of fasting in preparation for Easter did not, as a rule, exceed two or three days, as is evident from a statement of Irenaeus recorded by Eusebius (Hist. Eccl. 5. 24. 12). The first mention of a period of 40 days…, prob. of Lent, occurs in the Canons of Nicaea (ad 325; can. 5). The custom may have originated in the prescribed fast of candidates for baptism, and the number 40 was evidently suggested by the 40 days’ fasts of Moses, Elijah, and esp. the Lord Himself, though till a much later date the period was reckoned differently in the different Churches.

According to the ODCC, the current format for Lent, where it starts on Ash Wednesday and goes until Easter Sunday, for a total of 40 days (not counting Sundays) began in Rome in the 7th century.

Why not count the Sundays in Lent toward the 40 days?

Some people do count the Sundays in Lent toward the 40 days.

However, those that do not argue that, although Lent is a season of fasting, every Sunday in the Christian year is a feast day. Every Sunday is a celebration of the resurrection of Jesus Christ. So, they don’t fast on Sundays.

Why is it called “Lent”?

See, in Greek and Latin, the names for Lent make more sense, because they’re based on the number 40.

However, English is more confusing. According to the Online Etymology Dictionary (a fascinating website):

So, “Lent” refers to the lengthening of the days during springtime.

(Incidentally, “lentil” has a separate etymology.)

What are some common practices during Lent?

Check out these Anglican Pastor posts on common lenten disciplines:

Regarding the history of lenten fasting, the ODCC notes,

During the early centuries the observance of the fast was very strict. Only one meal a day, taken towards evening, was allowed, and flesh-meat and fish, and in most places also eggs and lacticinia [milk and dairy products], were absolutely forbidden. From the 9th cent. onwards in the W[est] the practice began to be considerably relaxed.

Today, in the Roman Catholic Church, people are only obligated to fast on Ash Wednesday and Good Friday. However, fasting from meat, fish, eggs, and dairy is still common in Eastern Churches.

Lent is generally observed as a time of penance by abstaining from festivities, by almsgiving, and by devoting more than the usual time to religious exercises. Of recent years in the W[estern] Church more emphasis has been placed on these aspects than on physical fasting.

Almighty and everlasting God, you hate nothing you have made, and you forgive the sins of all who are penitent: Create and make in us new and contrite hearts, that we, worthily lamenting our sins and acknowledging our wretchedness, may obtain of you, the God of all mercy, perfect remission and forgiveness; through Jesus Christ our Lord, who lives and reigns with you and the Holy Spirit, one God, for ever and ever. Amen.

The First Sunday in Lent

Almighty God, whose blessed Son was led by the Spirit to be tempted by Satan: Come quickly to help us who are assaulted by many temptations, and, as you know the weaknesses of each of us, let each one find you mighty to save; through Jesus Christ your Son our Lord, who lives and reigns with you and the Holy Spirit, one God, now and for ever. Amen.

The Second Sunday in Lent

Almighty God, you know that we have no power in ourselves to help ourselves: Keep us both outwardly in our bodies and inwardly in our souls, that we may be defended from all adversities that may happen to the body, and from all evil thoughts that may assault and hurt the soul; through Jesus Christ our Lord, who lives and reigns with you and the Holy Spirit, one God, for ever and ever. Amen.

The Third Sunday in Lent

Heavenly Father, you have made us for yourself, and our hearts are restless until they rest in you: Look with compassion upon the heartfelt desires of your servants, and purify our disordered affections, that we may behold your eternal glory in the face of Christ Jesus; who lives and reigns with you and the Holy Spirit, one God, for ever and ever. Amen.

The Fourth Sunday in Lent

Gracious Father, whose blessed Son Jesus Christ came down from heaven to be the true bread which gives life to the world: Evermore give us this bread, that he may live in us, and we in him; who lives and reigns with you and the Holy Spirit, one God, now and for ever. Amen.

Almighty God, you alone can bring into order the unruly wills and affections of sinners: Grant your people grace to love what you command and desire what you promise; that, among the swift and varied changes of this world, our hearts may surely there be fixed where true joys are to be found; through Jesus Christ our Lord, who lives and reigns with you and the Holy Spirit, one God, now and for ever. Amen.

Other Lent Posts at Anglican Compass

We’ve got a bunch of Lent resources here at Anglican Compass. Check out the following posts.

Of course, we don’t have the Lenten market covered here at Anglican Pastor! Check out these other great Lent resources.

Books to Read this Lent

Did I leave anything out?

If there’s something I didn’t mention that you think should be in this introduction/guide to Lent, please let me know in the comments below!