What are the Anglican Vestments?

Anglican Vestments Can Be Confusing

I knew almost nothing about Anglican vestments when I first visited an Anglican church. My only experience of robes was graduations—and that one time my dad wore a hilarious robe with colorful puffies glued onto it by a friend, as a joke. (You can read more about my [Greg’s] Anglican journey here.) You walk into an Anglican church and you see some ministers wearing white robes of some sort, with colorful scarf-like things around their necks, and some are diagonal. A few lay people are wearing robes, and so is the choir. If the parish has a Verger, they would wear a black cassock with a Vergers gown. Sometimes you’ll see brightly colored material over the top of the white robes. Or you might be likely to see only the priest vested but not the other servers or the musicians. In some places, you might see just the scarf-y thing without the white robes. And after a few months, you notice that the colors are changing over the course of something called the church year… what’s up with all of this? So, like many of you, I was not sure why the robes, and I definitely wasn’t sure what they were for, and what to call them. But now I do know something about Anglican vestments, having worn them myself for almost 10 years. (Not continuously or every day. Mostly just on Sundays! So, I’ll tell you about the vestments. Not all about them—that would be boring and, quite frankly, I’m not an expert—but just the basics that you can visibly see. 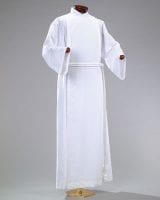 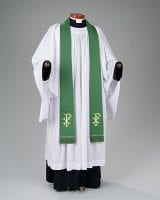 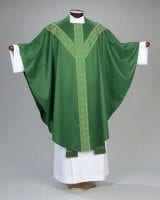 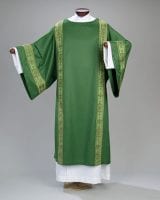 Photos from Almy. The basic idea of Anglican vestments is to symbolize order, office and role or function. This is true of any uniform that we use in society. They are not supposed to be used for personal expression, but are supposed to be uniform within certain sacred design patterns. (e.g. they aren’t supposed to have personalized messages, political messages/symbols, sports or patriotic related colors/symbols, or iron-on pictures of my children, etc).

White robes have long signified the righteousness of Christ, worn as a garment. Wearing a white robe means that I’m not serving because I’m a great guy. I’m serving because Jesus loves me and you—and he covers me with his righteousness. The two principle white vestments are the Cassock-Alb or the Surplice. The Cassock-Alb is a single garment. The Surplice is always worn over a cassock (see next).

Black robes are really/technically not vestments. The black Cassock (the one that looks like Neo’s outfit in the Matrix) was just the priest’s street clothes back in the day. The cassock is worn under a white surplice. Now, sometimes you’ll see a purple or red cassock. These are used in the same way as the black cassock. Often they are associated with the colors of the cathedral church or the Bishop’s canons (assisting people).

Some of you will see a priest wearing a Chasuble. This is a large piece of material, cut round or diamond shape, with an opening in the middle. This is worn during eucharistic services. (To learn more about the structure and parts of Holy Communion, AKA the Eucharist, go here.) The deacon will wear a similar vestment called the Dalmatic. Under this is the white alb. Generally, a church either really loves these vestments, and uses them all the time, or doesn’t use them at all. Not much of an in-between there.

Stoles are signs of order and office. The Priest’s Stole hangs vertically over each shoulder. The Deacon’s Stole hangs diagonally from the left shoulder and then is secured at the right side. Note that a black Tippet is not a stole. A deacon or priest will wear these for non-eucharistic offices at times, or when not serving at the altar in a particular service. Lay ministers, readers, or choir members will sometimes wear a Cassock-Alb or Cassock and Surplice with no stole (some customs include a blue reader’s “scarf” which isn’t considered a stole).

The Cincture is a belt for an Alb or a Cassock. These come in band or rope varieties.

The colors of the stoles, as well as the Chasuble and Dalmatic, change based on the seasons of the church year. Basically like this:

I hope this brief guide to Anglican Vestments answers your basic questions. If not, please comment below! Note: I’m using Almy’s photos here, but this post is not sponsored by them and we receive no benefit from the link.